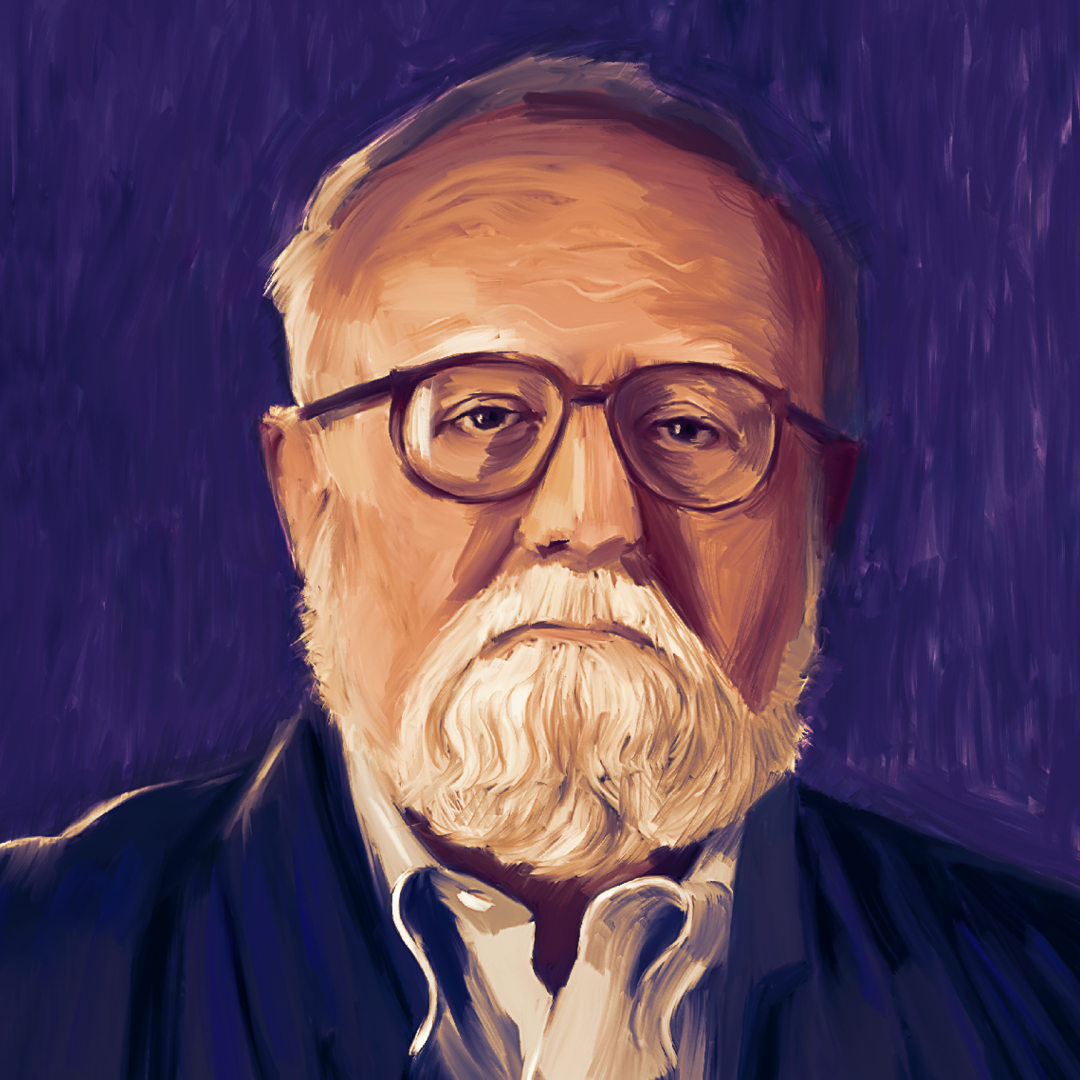 Composer and conductor born in Dębica, died in Cracow. He studied composition in 1954-58 with Artur Malawski and, after the latter’s death – with Stanisław Wiechowicz in the State High School of Music in Kraków. In 1958, he became a lecturer in composition at his alma mater, of which he was a rector in 1972-87. He also taught at Folkwang-Hochschule für Musik in Essen (1966-68) and Yale University in New Haven (1973-78). In 1968-70, he held the scholarship of Deutscher Akademischer Austauschdienst (DAAD) in Berlin.

Krzysztof Penderecki made his conducting debut in 1971 in Donaueschingen, where he led the performance of his Actions for free-jazz orchestra (1971). Since then he always had a busy conducting schedule. In 1972, he recorded his works for the EMI with the Great Symphony Orchestra of the Polish Radio and Television in Katowice. He conducted numerous famous orchestras worldwide, e.g. Munich Philharmonic, Sinfonieorchester des Norddeutschen Rundfunks in Hamburg, Sinfonieorchester des Mitteldeutschen Rundfunks in Leipzig, London Symphony Orchestra, Philadelphia Orchestra, New York Philharmonic Orchestra, the Japanese Radio NHK Orchestra in Tokyo, Osaka Philharmonic, and others. Since 1988 he was the first guest conductor of Sinfonieorchester des Norddeutschen Rundfunks in Hamburg, then Mitteldeutscher Rundfunk Sinfonie Orchester in Leipzig. From 2000 he was a guest conductor of the China Philharmonic Orchestra.

Krzysztof Penderecki received a total of 146 awards and distinctions in Poland and all over the world, which established his status as an internationally renowned composer.

He was the winner of numerous composition competition. In 1959, Penderecki won the three top prizes (1st, 2nd and 3rd prize) in the Young Composers’ Competition of the Polish Composers’ Union: for his Strophes for soprano, reciting voice and 10 instruments (1959), Emanations for two string orchestras (1958-59) and Psalms of David for mixed choir, strings and percussion (1958). In 1961 his Threnody “To the Victims of Hiroshima” for 52 string instruments (1959-61) was selected at the IRC (UNESCO International Rostrum of Composers in Paris). In 1962, he won the 1st prize for his Canon for 52 string instruments and magnetic tape (1962). The composer was twice awarded Prix Italia: in 1967 for Passio et mors Domini Nostri Jesu Christi secundum Lucam for 3 solo voices, reciting voice, 3 mixed choirs, boys’ choir and orchestra (1963-66), and in 1968 for Dies irae. Oratorium ob memoriam in perniciei castris in Oświęcim necatorum inexstinguibilem reddendam for 3 solo voices, mixed choir and orchestra (1967). Penderecki received four Grammy Awards from the national academy of Recording Arts and Sciences: in 1988 for Cello Concerto No. 2, recorded for the ERATO label with Mstisław Rostropowicz as a soloist, in 1999 for Violin Concerto No 2 (Best Contemporary Classical Composition) and its recording with Anne-SophieMutter and the London Symphony Orchestra under his baton, and in 2001 for Credo (Best Choral Composition). In 2008 he was awarded the PolishEagle Film Award in the Best Music category for the film Katyń. In 2011 his Da natura sonoris, used in the Quay brothers’ film Mask, was awarded the SacemPrize for the best original musicat the Annecy International Animation Film Festival.

Among the most important national and international distinctions are the Award of the Polish Composers’ Union for 1970, the Gottfried von Herder Award (1977), Jean Sibelius Award from the Wilhouri Foundation in Helsinki (1983), Premio Lorenzo Magnifico (1985), Karl Wolff Foundation of Israel Award (1987), Great Cross of Merit of the Order of Merit of the Federal Republic of Germany (1990), Grawemeyer Award of the University of Louisville (1992), UNESCO International Music Council Award (1993), Order of Merit to the Culture of the Principality of Monaco (1993), Commander’s Cross with Star of the Polonia Restituta Order (1993), Austrian distinction “For Academic and Artistic Achievements” (1994), Commandeur dans l’Ordre des Arts et des Lettres (1996), Music Award of the City of Duisburg (1999), AFIM Indie Award (1999), MIDEM Classical Award for the Best Living Composer of the Year (2000), Ordine al Merito della Repubblica Italiana (2000), Premio Principe de Asturias de las Artes (2001), Grand Prix of the Foundation of Culture (2002), Romano Guardini Award of the BavarianCatholicAcademy (2002), Preis der EuropäischenKirchenmusik (2003), Medal of the Judaica Foundation (2003), Medal “In Commemoration of the 300th Anniversary of Saint Petersburg” (2004), Praemium Imperiale (2004), Order of the White Eagle (2005), Commander of the Three Star Order of the Republic of Latvia (2006), AnnualAward of the Minister of Culture and NationalHeritage (2008), Gold Medal of the Minister of Culture of the Republic of Armenia (2008), Leonardo da Vinci Medal from the EuropeanAcademy of Sciences in Hanover (2008), Order of Bernardo O’Higgins, Chile (2008), Commander of the Order of the Lion of Finland (2008), Ordre de Méritedu Grand-Duché de Luxembourg (2009), Honorary Order from the President of the Republic of Armenia (2009), Bronze Medal, Distinguished Visitor of the University of Toronto (2010), Grand-Croix de l’Ordre “Pro MeritoMelitensi” (2011), PolishTelevision Academy Award Golden Super Wiktor for the greatest personality (2011), Lifetime Achievement Award 2012 International Classical Music Awardsat the Europa UniversitätViadrina Frankfurt (2012), Medal of the President of the Republic of Armenia (2013), Order of the Croatian Dawn (2013), Gold Cross of Merit of the Order of Saint Stanislaus (2013), International Istanbul Festival Award for lifetime achievement (2013), Order of the Cross of Terra Mariana, 1st Class, Estonia (2014), Order of Merit to Culture, Peru (2014), Grand Cross of Merit with the Star of the Order of Merit of the Federal Republic of Germany (2018), World Soundtrack Lifetime Achievement Awardat the Ghent Film Festival (2019).

In 2013 the Krzysztof Penderecki European Centre for Music was opened in Lusławice to honor the composer’s 80th birthday. The same year saw the premiere of Anna Schmidt’s Polish-German documentary Paths Through the Labyrinth. The Composer Krzysztof Penderecki. The world premiere of Dies Illa, written on the occasion of the 100th anniversary of the outbreak of World War I, took place in Brussels as part of the special project “Thousand Voices for Peace”. The psalm Domine quidmultiplicati sunt, written in 2015 on the 100th anniversary of the Armenian Genocide, was first performed at Carnegie Hall by the Armenian Hover State Chamber Choir. The world premiere of Lacrimosa No. 2 took place in 2018 on the occasion of the unveiling of the Monument to Victims of the Pomeranian Crime of 1939 in Toruń. The world premiere of Polonaise for orchestra by Penderecki inaugurated the 17th International Chopin Piano Competition. In 2018, on the 100th anniversary of Poland regaining independence, Penderecki’s Fanfare for the Independent Poland, commmissioned by the PWM Edition, was performed on 11 November in 11 prestigious concert halls around the world and on 11 concert stages in Poland.

In 2015 he was awarded the title of Honorary President of the PolishComposers’ Union.